A Career That Fits Your Schedule & Rewards Your Effort

Residential and commercial cleaning work that is flexible, rewarding, and appreciated.

✓ Appreciation for Your Work

No one should feel like “just another employee,” stuck in a job that’s not a good fit.

What’s so great about cleaning houses and businesses with the Plum team?

Most cleaning is done during typical work hours, Monday–Friday. You can be home to put your kids on the bus and get them off. You don’t have to miss “the big game.” You don’t need to work weekends or nights unless you want to.

Everyone deserves to be paid well for their hard work. The pay during your month of training is $11/hour. That automatically jumps to $14/hour once you’ve completed your training. If you do a good job and your clients tip you, that’s yours to keep. We also offer a bonus program for cleaners who earn verified reviews. Doing a good job really pays off.

If you’re tired of your coworkers or a boss that “hovers” all the time, this will be a delightful change. For the first month, you’ll clean alongside one of us. But when we’re all comfortable, you’ll switch to cleaning on your own. You make decisions, and solve problems. You keep yourself on task and on time. And you can do it all while listening to music, books, podcasts… That’s so much better than listening to the drama coming from the break room.

Good for Your Body

We’re not claiming that cleaning is a weight-loss program, but it is hard work that’s good for your body. Lifting, stretching, pushing, reaching… it is like a functional workout. Here’s a chance to get out from behind a desk or away from a screen.

Results You Can See

When you’re done cleaning, you can see the difference. Not only have you cleaned someone’s space, you’ve made their life better. You get to see the counters sparkle and the homeowners smile.

You will never have to wonder if you’re doing a good job. We will let you know. The client will let you know. You’re providing a valuable service. If you’re doing the work well, you’d better get used to hearing “thank you so much,” “great job,” “you’re wonderful.”
JOIN OUR TEAM
“It’s awful to work at a job where you feel replaceable. I’ve done that because I had to. Now that I’m a part of the Plum team, I feel needed. Every day, I accomplish something that people appreciate. I finally feel like I’m doing something significant. I feel like I belong, and I love it.”
Lorrin

You deserve a job that is flexible and rewarding.

It’s hard to find a job with flexibility that pays well and that values your effort. At Plum, we employ a team of top-quality residential and commercial cleaners who are paid well for doing meaningful work and are appreciated every day. 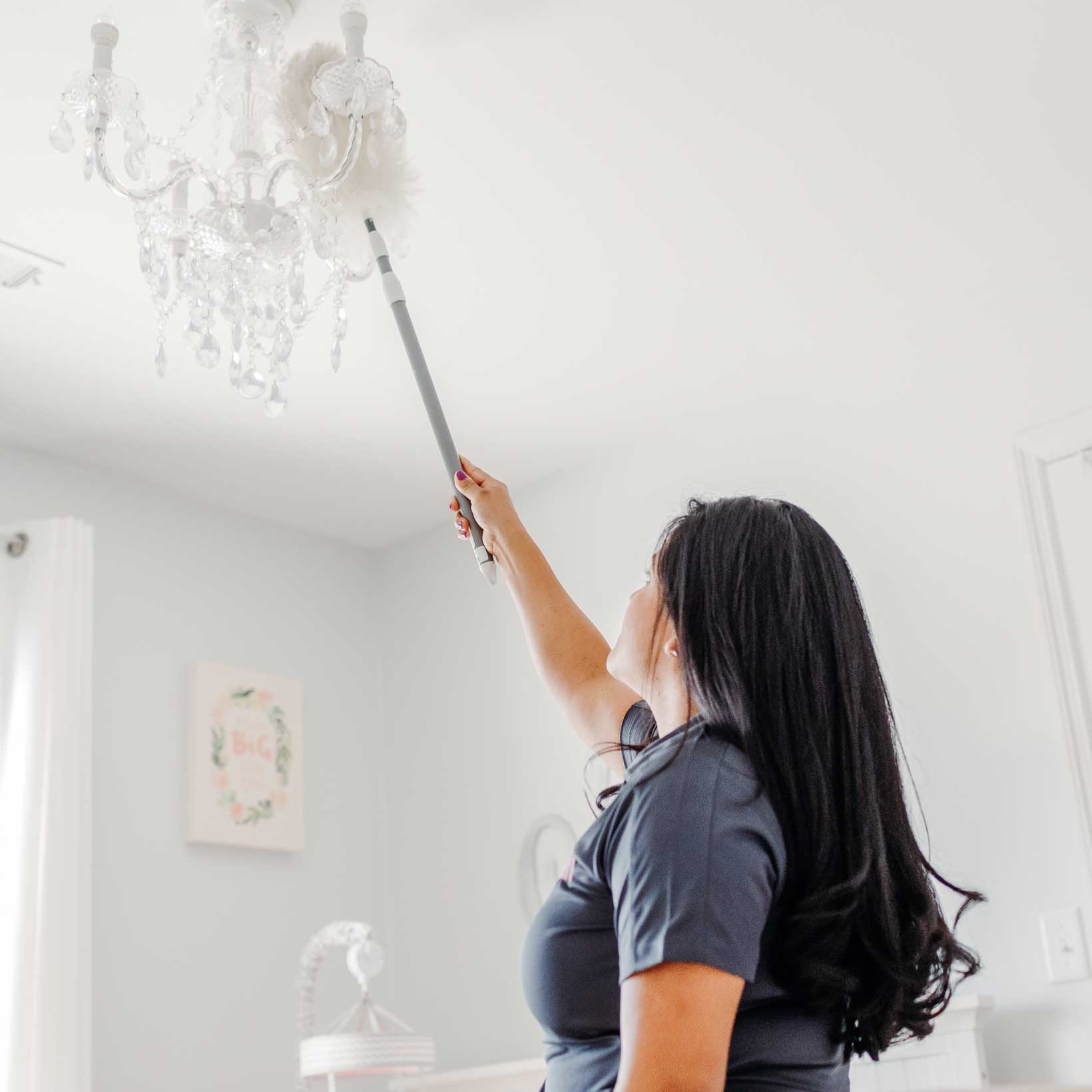 What makes a good cleaner? We’re looking for team members who:

JOIN OUR TEAM
“I hadn’t worked in a few years. I was bored and ready for something new. I’m so happy I get to work with the Plum team. The atmosphere and pay are great. So are the people.”
Nichole

How to start your cleaning job with Plum:

Click any “Join Our Team” button to submit an application on Indeed. You must fill out the two assessments completely in order to be considered. Successful applicants will be contacted for an interview.

Once you’re hired, we provide all the coaching and supplies you need to be successful.


Part-time and full-time positions are available. You will start with training and an initial part-time schedule that helps you succeed. Once we and you are confident in your skills, you will have the opportunity to work full time. Almost all team members accomplish this within 30 days.

What kind of experience do I need to work at Plum?

We don’t require any prior experience. Whether you’ve been a house cleaner for fifteen years, or you have never touched a mop before, we would be more than happy to have you join our team of pristine cleaners! We train every cleaner on our methods so that expectations are clear and our clients get consistent cleanings.

What happens after I submit my application?

If, after a successful working interview, you are still interested in the job, you will be hired and onboarded.

How many hours can I work in a week?

Anywhere from 20–40 hours, depending on whether you want full-time or part-time work.

Can this be a second job? I’m already a parent / student / employed somewhere else?

Absolutely! If you need to pick up the kids or be at your second job at 3:00PM every day, we will make sure you get out at 3:00PM. We do not offer a night position, however. So, you do need to be able to work for us sometime between 9:00AM–5:00PM.

What do you mean by “flexible schedule”?

It means we are willing to work with you to find a schedule that fits your needs. If you are a single parent that needs to be out at a certain time to pick up the kids, we will make sure you are out at that specific time. If you are a student who is only available to work certain days or times, then we can work out a schedule with you that lets you do your schoolwork while working for us.

Whatever your need may be, we will try our best to accommodate you.

How do I find out my schedule?

We use an app called Jobber for all our scheduling needs. During your onboarding, we will have you download the app. You will use the app to view your schedule for the week.

What time do I have to arrive at work each day?

During the training period (2–4 weeks), you must arrive at the office at 8:30AM. Once you start working on your own, you are expected to arrive at your first job at 9:00AM.

What is the pay range?

$11–$14 an hour. You will start at $11 an hour for the training period. Then you will be bumped up to $14 an hour automatically once your training is complete.

When and how often will I get paid?

We pay our employees weekly, on Friday.

Can I get tips from my clients?

Some clients choose to tip their cleaners. We don’t expect them to, and you should never ask for one. However, if you’re given a tip, it’s yours to keep. If you are working with another cleaner, we ask that you split any tips you receive.

Will people be at home when I’m cleaning?

It varies from client to client, but typically, yes, they will be in the home. COVID-19 has caused many of our clients to remain at home during the day, so you will likely be cleaning while they are around. Rest assured, we also ask our clients to maintain social distancing while you are there. They will not be in your way while you clean.

What are your COVID-19 safety protocols?

Will I always work alone?

For the most part, yes. During your 2 4 week training period, you will receive hands-on training every day from one of our instructors. After we and you feel confident in your skills, you will be sent out on your own. From there on, you will be subject to random quality checks to ensure that you are upholding our pristine clean standard.

You may be assigned to work as part of a team if a certain job is too difficult for one cleaner to perform alone.

Do you provide all of the supplies I need?

Yes! Our office is stocked with all manner of cleaning supplies and tools. We will provide everything that you need. The only thing we need you to bring is yourself!

Can I really listen to what I want while I work?

If you wear headphones, yes! We encourage you to listen to music, podcasts, audiobooks, lectures, etc. as you work!

What does a typical day of cleaning look like?

This example is for someone cleaning full-time (an 8-hour day): You will arrive at your first client’s house promptly at 9:00 AM. Once you arrive, you will clock in, put on your COVID gear, and begin cleaning the house from the top to the bottom. At Plum, we do not cut corners, and we leave no surface of the house untouched. Unlike other cleaning companies, we always clean every room in the house before we leave.

Do I need to have a driver’s license and my own vehicle?

Yes, we require you to have both because our cleaners use their own vehicle to drive from job to job. You also will need to store cleaning supplies in your vehicle to use as needed.

How far will I have to drive to different jobs?

You should expect to travel between 5–30 minutes from your home. We service many areas in Central PA, including Bellefonte, Boalsburg, Port Matilda, State College, and Spring Mills. Having said that, we try to take the living situations of our cleaners into account before we make the schedule. So, if you live in Port Matilda, we will do our best to have you clean houses in that area so your travel time is minimized.

We also try to factor in the time it takes between two jobs, so your travel time at work is minimized as well.

Will you do a background check and drug test?

Yes. We require all cleaners to take and pass a background check. This will be complete before your onboarding day.

What happens if I get injured?

It depends on how serious the injury is, but if the injury is severe enough, the first step is to contact us, and we will send an ambulance to you. We can also take you to the ER if we are close enough. Then we will pay for your hospital bills via worker’s compensation. Rest assured your job will still be here if you must take off for an extended period.

Where is your office located?

What’s the story behind Plum?

The roots of Plum began long ago when Blanca was just a child. Her mother, Angie, would take her along to her house cleaning job during the day, and in the process taught her how to clean like an absolute superstar. No cutting corners, no compromises, just a pristine clean every time.

In 2016, when Blanca found herself at the end of her rope, raising two kids while working three jobs, she used those valuable lessons about cleaning and hard work and formed “Blanca’s Detailed Cleaning.” What began as a small business with a handful of clients has grown into a flourishing business, overflowing with satisfied customers. Many of those customers hired Blanca because they were unsatisfied with a competitor’s efforts!

Starting in 2020, Blanca decided it was time for a change. A new name, a new logo, but the same rock-solid standards that made Blanca’s Detailed Cleaning a household name. The new name, “Plum,” is a word that can be used to describe something that is the absolute best, a shining beacon of guidance and inspiration.

In 2020 and beyond, Blanca plans to grow Plum’s clientele and to expand Plum’s famous “Pristine Clean” to other parts of the U.S.

JOIN OUR TEAM
“I was tired of doing boring and undervalued work. I wanted to try cleaning. I didn’t have any experience, but the pay was nice, and I could listen to music while I cleaned. My decision to join the Plum team was a great one! The work is interesting and satisfying. And, I get rewarded and recognized for my effort.”
Shane

Work that fits your schedule and rewards your effort.